Rejoice the Day of- Eid-al Adha 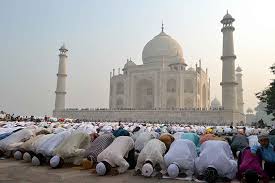 Eid al-Adha alias Bakra Eid is a very famous festival of Muslims which has been celebrated by people all over the world. On this festival, people meet to each other for wishing and also go for social gatherings to celebrate their happiness. This festival actually lasts for three days as it falls on the 10th day of Dhu al-Hijah, according to the lunar-based Islamic calendar.

Bakra Eid is an Islamic festival to mark the desire of Ibrahim to follow the GOD’s order to sacrifice his son Ishmael. However, Eid al-Adha is also known as the Feast of Sacrifice. Moreover, the Arabic word “Eid” is known as festival and the word “Adha” means to sacrifice.

After Eid al-Fitr, Bakra Eid is the second most famous festival of Islamic devotees and on this day the Muslims sacrifice cows, goats, lambs or other animals. Then, after sacrificing the meat gets divided into three essential parts: one part gets share within the family members, and the other half is given to the relatives and the third part is given to the poor and needy people. These were the ways of Muslim devotees to celebrate their festival.