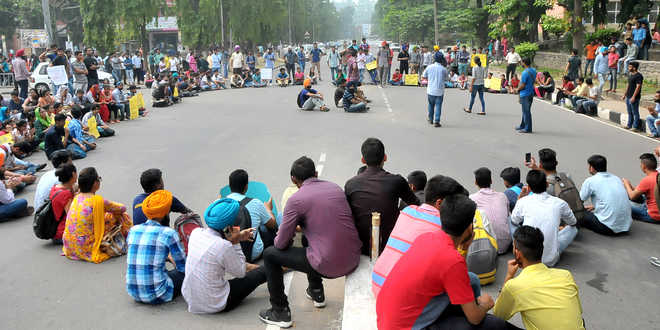 Yesterday the supporters of the SFS protested in Punjab University. They Blocked the Gate No. 2 for around one hour. They are protesting against the hike in examination fee. They gave very tough time to authorities of the Punjab University and security personnel.

They are also demanding that case would be taken back which is registered against the 18 SFS supporters while they were protesting on September 26. From last 10 days this is the second protest. PU authorities are in tension because of these incidents so large number of police security was deployed in the PU Campus as well as outside the campus.

Outside the Gate No. 2 DSP, DM and around 40 security personnel were present with a A riot-control vehicle named as Vajra which was armed with with tear gas and water cannons. Because of the large number of police that was deployed in the campus and also outside the gates of PU the protesters were witnessed playing hide and seek for avoiding the actions. Also the VC of Punjab University was stuck on the road because of the protest.

SFS president told that the examination fee hike affecting the students and this protest is now on. They also raised slogans at the residence of VC in evening for around half hour.

Chief of PU security Jatinder Grover filed a complaint against the 3 supporters of SFC in Sector 11 police station. He told in the complaint that they blocked the Gate No. 1 and 2 and broke the locks. This was an unlawful act and caused in inconvenience to people . But no case has been registered after this complaint.