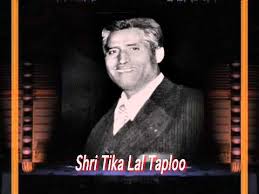 The 26th Balidan Divas was remarked today by the disappeared Kashmiri Pandit community. In 1989, the discerning killing of Pandits in the valley has affirmed the people to struggle for their homeland within the valley. Today, the ceremony has been celebrated by Kashmiri Shayak Sabha in Chandigarh which is located at sector-24 Kashmiri Bhawan for giving the floral tributes to the Shaheed Tika Lal Tapoo.

President of KSS Chandigarh, Mr. Romaish Pandit has expressed that –“In 1989, the terrorists killed the leader of Kashmiri pandit got Shree Tika Lal Tapoo who got triggered and then many of the members vanished from the community of pandits.” Thus, 14th September has been already declared as the ‘Martyrs Day.’

The name of the Tapoo and other community martyrs has got enrolled their names with gold bulletins in the journal of history. Today, on the event, the Kashmiri pandits emphasized the attention of this memorable day and rehearsed to reconcile the issues for the overhaul which embrace the foundation of distinct homeland for the seven lakh pandits within the valley.