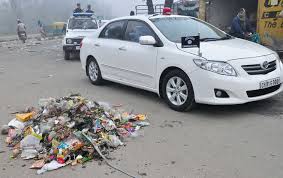 Sanitation is the immense issue nowadays and the Municipal Corporation of Mohali has been failed in cleaning the city.  During a casual survey, it has been perceived that the amount which is spending by MC Rs 3.75 lakh for daily cleaning is looking like a scrap.

The major issue for poor sanitation has been mostly found in Phase I and in Phase VI.  The MC Department has taken the help of a private company to clean the city with the help of mechanized sweeping system. The MC department has to spend Rs 13.51 crore for the project of cleaning city. While the launch of this new Mechanized Seeping System, the Punjab Deputy Chief Minister Sukhbir Singh Badal has expressed his feelings by telling that “he asked to make the Mohali as the cleanest city of the country by the ultimate end of the month of August.”

The Mayor of the town Mr. Kulwant Singh has declared that the private company who has given the project of cleaning will be review soon and the Vigilance department will investigate about the cleaning issues and complaints in the town.