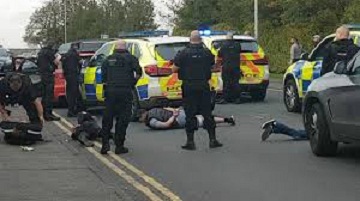 A joint operation has been carried out by Punjab and Chandigarh police together in order to arrest the gangster named Dilpreet Singh, also known as Baba, at sector 43 bus station.

He has shot three bullets in the leg as he was trying to run away from the officers. The gangster was later admitted to PGIMER, Chandigarh.

He is the same person who shot Punjabi artist Parmish Verma and later released a video on Facebook confessing about it. He also killed a sarpanch named Satnam Singh last year in April and Chandigarh police has been searching him since then.