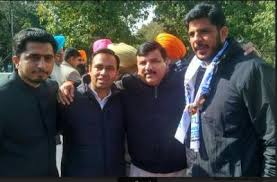 Variender Gill commented that he will campaign for Aam Aadmi Party from his resident in Abohar. In his statement he said” There are several Punjab University graduates in the area and most of them have already aligned with AAP. Congress is facing anti-incumbency in the area and people are looking for change this time”.

Do you agree with Gill’s statement to bring change, Did AAP party is the one who will change the future of Punjab, Do share your review & stay connected for latest Updates about Punjab Assembly Polls 2017.