A Massive Fire Broke Out At HDFC Bank, Mohali 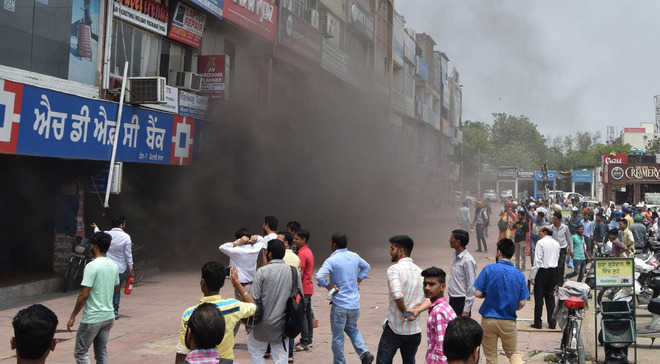 Goods, involving computers and furniture, financial worth several lakhs and  valuable documents were ruined in a fire that broke out at the HDFC Bank Branch, located in Phase VII this morning.

Luckily, nobody, including students who were taking tuition on the upper floor of the building, endure any injury in the occurrence, which happened around 11.30 am.

Being a national holiday on account of Eid, nobody was present in the bank at the time of the occurrence. The watchman of the bank, Baldeep Singh, saw smoke arising from the windows of the locked branch. He raised the alarm and informed the fire office instantly at 11.34 am. Two fire engines were oblate into service to control the blaze.

Fire officers broke the locks of the shutter and a part of the wall at the back of the building to enter the bank.  It took almost two hours to soak the fire, said spectators.

Fifteen computers, furniture and important documents were ruined in the blaze. Although, lockers and cash, lying- in the basement, and two ATMs, placed on the ground floor, were found secure as the flame did not reach there.

“A short circuit may have led to the fire accident,” told by ML Sood, local fire officer.