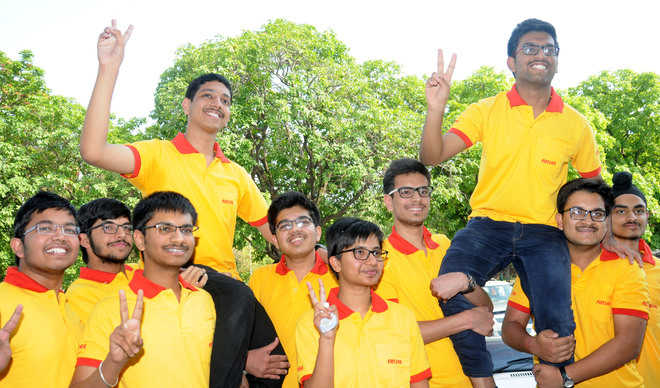 The result of the JEE (Main) was announced on April 27, 2017 for Paper 1 along with the Score. Boy named as “Tanishq Gupta” brought praise to the tricity by scoring the all-India rank (AIR) 19 in the JEE Main examination, 2017. Tanishq Gupta is the lodger of the city Chandigarh. He secured 335 marks out of 360. He took guidance for this JEE examination from here(Chandigarh). He did his senior secondary from Kulachi Hansraj Model School, Delhi.

Tanishq aims to study at IIT, Delhi, and wants to be a world-class computer engineer.

Tanishq has also been prefered for the Orientation-cum-Selection Camp (OCSC) for Physics in 2017. In OCSC for physics, 2017, only the 35 top students of the country were invited.

He had also selected for the second round of Physics, Chemistry and Astronomy Olympiads, which are handled by “Homi Bhabha Centre for Science Education”.

Instead from Tanishq, other city boys named “Shashij Gupta” and “Rushil Gupta” also made the list of toppers of JEE.

Shashij attained all-India rank (AIR) 31 in JEE(Main). He got 330 marks out of 360. Rushil attained AIR 39. Both are the pupil of  “Sri Guru Gobind Singh Collegiate Public School”, Sector 26, Chandigarh. They both had scored a perfect 10 in their Class X.

Approximately 12 lakh students from the country analysed their skills at the JEE (Main) that took place in three parts earlier this month.

More than  one lakh aspirants from the general category who have passed this JEE(Main) exam will now appear for the JEE (Advanced) to compete for approximately 5,500 craved  IIT seats (general category).