Not The Smart Way On-wards 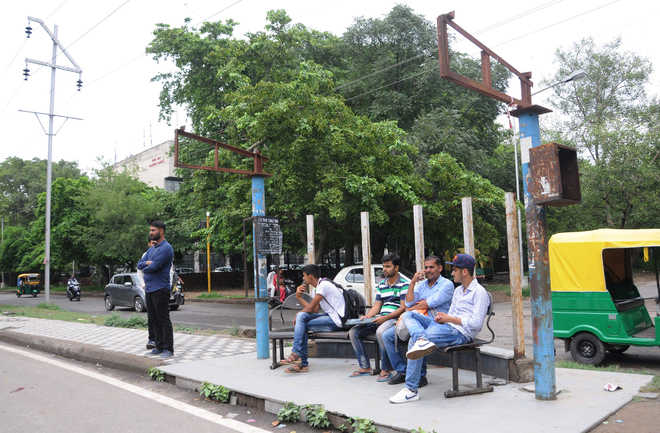 While the UT Administration introduced several Smart City projects on June 25 with much commuters, fanfare in the Chandigarh city  can be seen standing at roofless bus queue shelters facing the quirk of weather.

It has been more than six months since some mischievous persons stole iron rods and roof equipment of bus queue shelters, but the Administration has failed to change these, leaving hundreds of passenger in the lurch.

Sources said around 200 bus queue shelters in the city were in bad appearance. While no efforts have been made to recognize the  persons who stole the iron stuff from bus queue shelters and take legal action against them, the Branch of Engineering has failed to start construction work on new ones as it is waiting for sketch from the Architecture Department.

Chief Engineer of the Administration Mukesh Anand, said work would be started once the department got the sketch. The gap in the construction might affect the intelligent public transport system scheme of the CTU, which it wants to implement in the upcoming two years. Under the scheme, the CTU is improving its services through IT-enabled tools.

Director, Transport, Amit Talwar, said the CTU would require at least 500 bus queue shelters on various routes and had written to the Engineering Branch in this regard.

The Administration currently decided to build new bus queue shelters with the new technology. The new shelters of buses will be constructed with concrete using some steel. The provenances said the tenders for around 250 bus shelters would be floated after getting the sketch from the Architecture Department. In 2004 the Administration Department had constructed bus shelters using steel  but these did not last long.

Sushma, an worker of a private bank in Sector 8, told that the bus queue shelters in the city were in a pitiful condition.

She said these served little motive and failed to protect passenger from rain as most of these were without shelters.