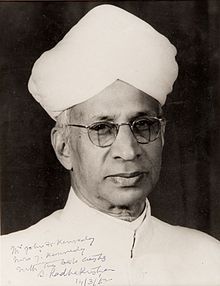 ‘Teachers’ Day is a special day for the appreciation of teachers, and may include celebrations to honour them for their special contributions in a particular field area, or the community in general. The date on which Teachers’ Day is celebrated varies from country to country.

Radhakrishnan was awarded several high awards during his life, including a knighthood in 1931, the Bharat Ratna, the highest civilian award in India, in 1954, and honorary membership of the British Royal Order of Merit in 1963. Radhakrishnan believed that “teachers should be the best minds in the country”. Since 1962, his birthday is celebrated in India as Teachers’ Day on 5 September.

When he became the President of India, some of his students and friends requested him to allow them to celebrate his birthday, 5 September. He replied,

“Instead of celebrating my birthday, it would be my proud privilege if 5 September is observed as Teachers’ Day.”

His birthday has since been celebrated as Teachers’ Day in India