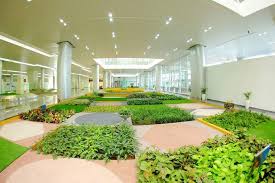 Chandigarh has been come up with the first eco-friendly airport across the country. This airport was inaugurated by Narendra Modi but the name still has to be decided yet. At this platform, all the eco-friendly technology has been used and the project to build the airport was given to the Larsen and Toubro.

It has been seen that in most of the airports there is a usage of artificial lights to brighten the place but in Chandigarh airport there will be only 40% of LED s has been used and during the day there be only natural lightening. Also, the air-conditioners are much eco-friendly as they will turn off automatically where it will not sense the heat.

Moreover, the aeration technology has also used for the harvesting of plants and a solar plant of 200KW has also installed on the rooftop for the requirements of power needs of the airport. Now, Delhi has been traffic the most because of the international and domestic flights but when the Chandigarh airport will get functional then there will be equal number of traffic of the international fliers.