Chandigarh Community Striving for Equal Rights for the LGBT 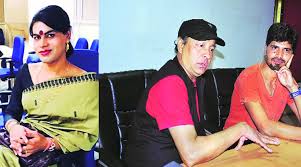 During, the LGBT (Lesbian, Gay, Transgender and Queer) film festival at Punjab University, the Simran Kaur walks very elegantly in the seminar hall of Centre for Human Rights and Duties and declares that “I am the first transgender who had gained the regular admission in B-Tech in Pathankot via PTU.”

She belongs to a Punjabi family and to accept your child as a transgender was very difficult for them. So, she moved to Manimajra and pursued her studies and completed her diploma in Mechanical Engineering under her guru, “Kajal Mangalmukhi”.

For the first time in Chandigarh the Kashish Mumbai International Queer Film Festival has been put forward to create the awareness and inspire empowerment. However, the Supreme Court has given the equal rights to them so they can do whatever they want to do. Rangayan, who has registered Kashish, truly believes that “His aim is to create awareness among the youth and also to convey out this message to the parents, that they are also humans, they also have feelings, they also want to live their life freely, so never bias with them. They are a gift of GOD so we should always take care of them and love them the most.”