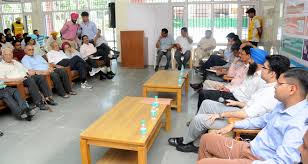 A project of Sarangpur village was adopted by Kirron Kher which was a flagship program of PM Narendra Modi and adopted under the Sansad Adarsh Gram Yojana. But the Member of Parliament got unsuccessful in completing the project.
Regarding this issue a meeting was held at UT Guest house in the presence of Vijay Kumar Dev who is the UT Adviser. In that meeting MP Kirron Kher gave a deadline from 15th October to 18th October to complete the project.
Kirron Kher also felt annoyed on some of the departments of UT Administration, as they did not give reply of her letter. Further, MP Kirron Kher has approved the amount of Rs 4 Crore under the MPLADS and also sanctioned the amount of Rs 1.41 crore was for the development of Sarangpur village.