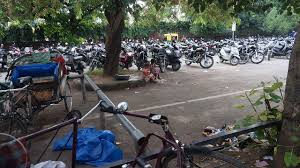 As the Chandigarh administration took the decision of closing Sector 22-B parking lot in order to build green belt & to have more space near the ISBT at Sector 17. The Municipal Corporation have written a letter to administration in which they told the administration that moving of parking lot is not feasible as this decision may lead to the subject of strong criticism from traders & people of UT.

As stated in proposal people have to park across the road near ISBT and come walking, using a table-top crossing who want to visit the belt of Sector 22. In their letter to chief architect, the engineer of the civic body suggested to create an underground multilevel parking with a landscaped area.

As per the sources there are thousands of traders who threatened to shut shop if the Sector 22 parking lot is closed. The chief architect & traders will have a meet with MC on this issue now. Let’s see what administration have to say as it is noticed that last year when municipal corporation had closed the two parking lots of Sector 17 — Empire Store & Sahib Singh in order to develop plaza, the MC have to given up and open the parking lots.