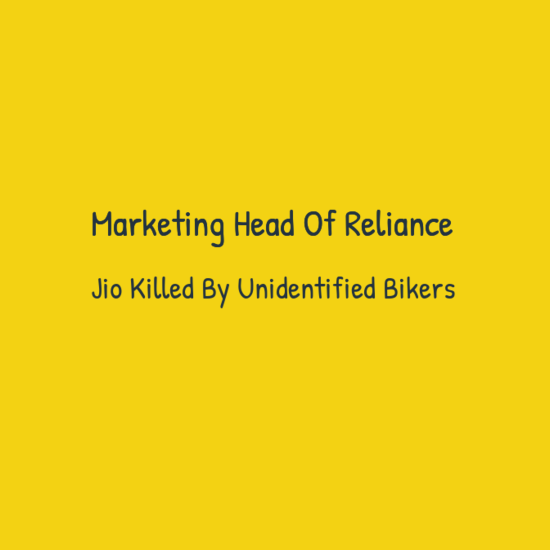 Yesterday the old marketing head of Reliance Jio was killed by three unidentified bikers near his apartment Uppal in Manimajra.

According to the police killers use axes to kill him.

All the incident has been caught on a CCTV camera that was installed near his apartment. But the video is not clear and there was no clue for assailants.  In investigation the police believe that killers was known to him and there is not a clue of robbery.

The name of victim is Vineet Tehran whose age is 38 yrs, a resident of Modern Housing Complex, was working in Reliance office at Mohali Phase 11. He live in Manimajra with his wife,  mother and only son. His younger brother is in Merchant Navy and his mother was passed away around 20 years ago.

According to the police the incident occurred at 11:30 p.m when Vineet in his Mahindra Car XUV that was parked in the entry gate of Uppal Housing apartment. In CCTV footage it is clearly shown that three men came in motorcycles and sit with him in his vehicle.

After a conversation the men start arguing with him. In fit of rage, all of three hit him with sharp axe three times. His blood was fallen on road.

The security guard of his society rushed on the spot at that time the killers had fled on their bikes. When police investigate then they explained that they robbed three mobile phones, a wallet and the vehicle keys of the victim.

The security guard informed the police and then police rushed to the spot and took him to Government Multi-Specialty Hospital   Sector 16 Chandigarh, where doctors declared him dead.

A murder case has been filed against three unidentified persons in Manimajra Police station.