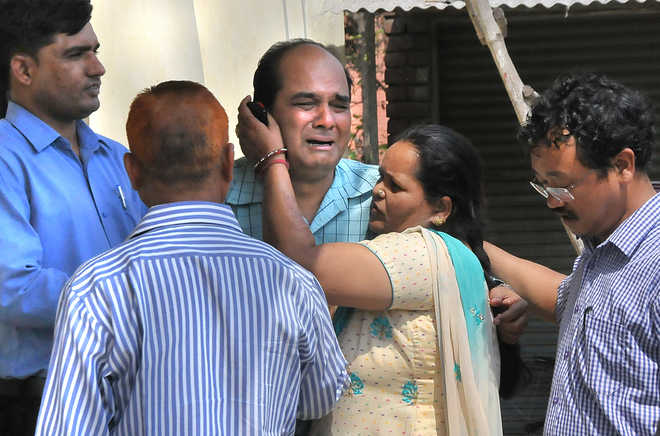 A woman was found murdered in the car near Nada Sahib Gurudwara (Panchkula district, Haryana) on last Thursday night. The name of the deceased was Reena Devi Pun. She was the school teacher and  was 39-year-old.

She was hailing from Himachal Pradesh. Her husband Sandeep Kumar Pun works in Baddi as a private security guard.

Police said that She was stabbed at least 25 times before she bled to death. The police have labeled it a blind murder.

The police also stated it’s a possibility, that the murderer could be known to the deceased lady.

On May 11, 2017(Thursday), Reena went to the sector 20 market to purchase something. Her younger son Punnu also with her. Punnu went to the shop to buying something while Reena waited for him in the car. When Punnu come back from the shop he found both, the car and his mother missing from the spot. After that, Punu went home and told the entire story to his elder brother sahil. Sahil then  informed the police regarding this matter.

After Investigation, Police found Reena’s body in a Maruti Celerio Car. The car bearing a Gujarat registration number. A beer bottle, helmet  and  Reena’s Cell phone was found in the car. Where Reena’s cell phone did not have the SIM card and The helmet, which also found in the car  does not belong to the family according to Reena’s son Punu.

The car had blood marks inside and also on the driver side door, which “indicate some struggle” between them.

Reena was announced brought dead by the doctors  at the Civil Hospital in Sector 6. Her post-mortem cleared that she was stabbed at least 25 times and in various parts, including the legs, chest and  abdomen. The police have booked a mysterious  person for this murder.

Reena’s husband told tothe police that – he spoke to Reena over the phone at 9.15 pm. After that, his cell phone got switched off due to low battery.

In the dawn, his brothers informed him about Reena’s death and then he came from Baddi.