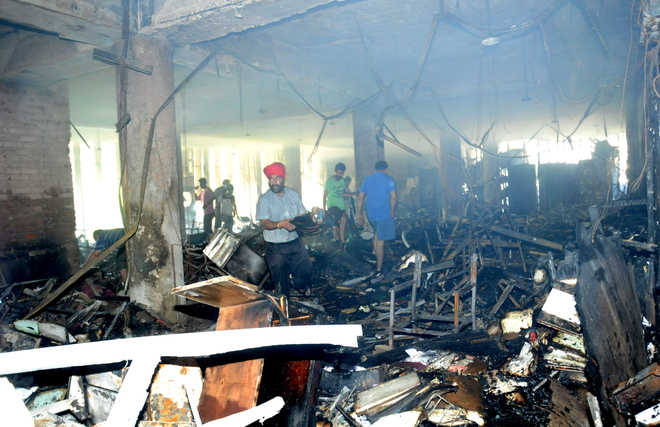 A great fire broke out in the account section of the management structure of Panjab University in the beginning hours of  Sunday morning.

The main reason of this fire broke out came in front  is said to be the “short-circuit”.

The officials said,in  saturday  evening there was severe electricity variations. Around 4 pm, the electricity was gone . At around 4: 30 pm, as there was no electricity, all the workers left their particular offices. Some devices may thus have been left switched on, which caused the short-circuit at night.

This  fire broke out is so vast and horrible  that it not only  destroyed the wooden furniture and documents but also melted the ceiling. Except pension and service tax rooms, all other departments in the accounts branch were demolished.  These sections  includes  exam and payment, salary section,  grants and planning and a major part of the budget section.

However, the officials and the Fire Department are yet to determine the true reason of the fire.

While 90% of the data are manually kept  in the department. GS Chadha (the Registrar) said: “We have the whole backup of all data in a server, which is situated far away”.

The firefighting system placed  in the building blocked the fire from expanding  to other areas.

The firemen told them that the hydraulic system placed  in the building worked only for 10 minutes.

Parmajit Singh Gill, Fire Station Officer  said they got a call of fire  from the police control room around 3.10 am in the dawn.

After got the call, Fire engines immediately were sent to the place. Within the five minutes, all Fire engines reached at the location.

The fire engines did around 40 rounds of the fire stations for replenish and more than 1.5 lakh litres of water was used to take control over the fire. It took eight fire engines three hours to impose on the fire. However, the fire engines stopped that spot  till 1 pm and kept sprinkling water on the slowly burn rubbish.

Around 40 firemen took part  in this  operation and to enter the building,  they also broke the windows. Two hydraulic platforms were also used in this operation.

Also, Sanjay Tandon (Chandigarh BJP president) and other leaders were at the place throughout the day.

Tandon said: “I rushed to the place as soon as I got the information about this occurrence . I inquired about the damage and asked the officials to recover it all soon.”

Amit( A clerk,) said: “Almost all our work is done on papers and will not be recovered”. Even the one that can be recovered will take months to do so. Mark sheets, service records, Bills, transaction records, applications and many other documents were destroyed to the fire.