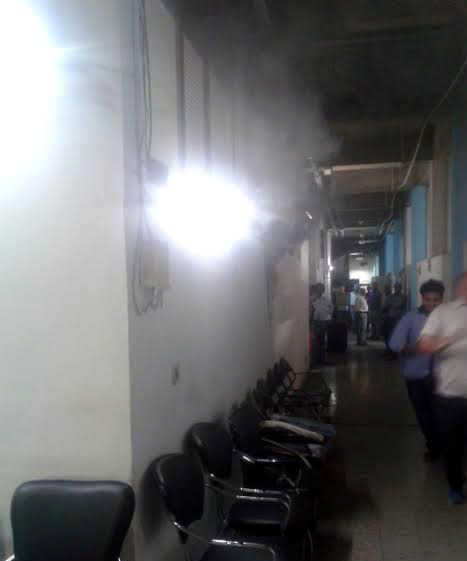 After the day when a major fire occurrence at the administrative block of Panjab University, a great fire occurrence was turn to the UT Secretariat building, Sector 9, Chandigarh.The fire started in the afternoon and on the third floor of the UT Secretariat building. The reason behind the fire is said to be the sudden burning one of the switchboard on third floor with a blast.

After sudden fire all employees on the third floor become panic. They started running from their respective seats to save their lives.
Some workers of UT Secretariat, power off the main electricity supply instantly, which stopped the fire from extending.

The complete floor was filled with the dark smoke for around 20 minutes, which made it hard for workers to breath.

The office of Jatinder Yadav, Director, Higher Education, is also placed on the floor and was near to the place where the fire occurrence took place.

The fire broke out started around 4.15 pm, when most of the workers were working in their seats.

An official declared that the fire was generated by the short circuit and was controlled instantly.

Home Secretary, Anurag Agrawal said- “orders would be emanated to check foolproof fire-safety settlements in the Secretary building”.
An employee said the fire broke out close to the offices, which had many papers and files.

This fire incident also revealed the ill-arrangements of the departments to handle with such incidents at the Secretariat. The alarm system was not working at the time of this occurrence. The most of the fire extinguishers that are installed inside the building are outdated. One of the employee said that this was not the first time, this was the third fire occurrence on the floor. He also said that the electricity load was increasing inside the building and the old wires had not been changed.