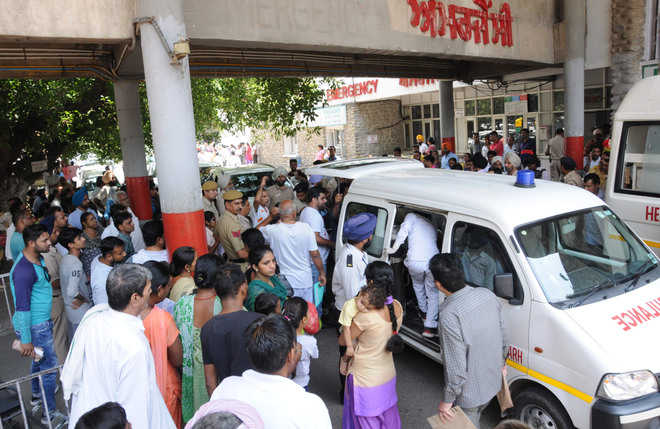 The occurrence at Sector 16, Government Multi-Specialty Hospital(GMSH) of MLAs made the disturbance in Punjab Assembly which lead to trouble for Patients.

Wounded AAP MLAs Sarabjit Kaur Manuke and Manjit Singh were attended by the party leaders HS Phoolka, Kanwar Sandhu and Aman Arora a headed with Akali MlAs Sukhbir Badal and Bikram Majithia to the hospital. When they arrived at the gate of Hospital, followers started raising slogans,disquieting sick patients.Outside the Emergency, they were stopped and requested not to scream.

As they enrolled in the hospital, patients and visitors were pressed by force.The speed of the media-persons and police personnel took patients by shocked. Lens-men were seen rushing after stretchers inside the hospital much to the irritation of the patients.No attempts were made to stop the large assembly of political leaders from entering the Emergency.

Resident of sector 21 Rajesh Kumar said that he was frightened to saw the large number of crowd entering the hospital and increasing their voice in slogans.Police asked to get aside while leaders were arriving.He bought his mother to hospital as she had problem of breathing.She was taken back by the fuss,he balm her.

The relative of Patient agreed to the saying of Hospital as juice was carried by them for the patients but it chop down on the floor in the melee.Leaders must understand that political should be eliminated from the hospital.It should be clearly commanded to the guards for not acknowledge anyone instead of the patients and the caretakers inside the emergence.

Outside the Emergency Crowd of curious people was found. Every individual was marveling  as what will happen further.