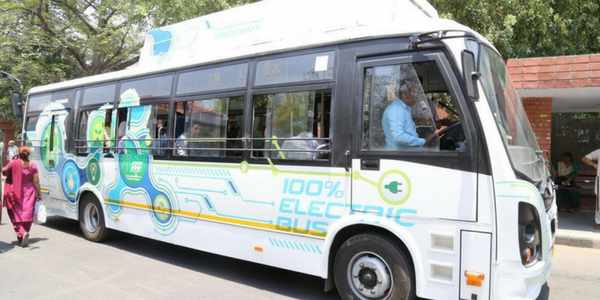 Smart City Project of Chandigarh stretches to CTU (Chandigarh Transport Undertaking) which has introduced a trial run for a Electronic bus in the city to work at local routes inside the Chandigarh city. Last day, it’s the first time for CTU to run the electronic bus on the trial basis in the Chandigarh city, along with 26 traveler capacity without a single traveler inside it.The UT Administration has determined to go outward  with the added aspect of making the Smart City Project in Chandigarh even more Smarter as it takes CTU services in consideration to reduce vehicle pollution by manifold.

Chandigarh Administration never  leaves un- returned when it decides upon something. While talking about the Chandigarh city,the development plan appear to be entirely equivalent to the city gracefulness which shall always stay beautiful as per the first perception of our Prime Minister(Sh.Jawahar Lal Nehru) of India. Administration of Chandigarh agreed to use Electric Bus in place of normal diesel buses run by CTU is a act greeted by everyone. Winning the heart of the citizens who has tried for the maintenance of Clean and green city. The electric bus are at present a extremely large gossip for the town since it’s first ride that work at fixed path from PGI to IT Park and back.

Highlights Of The  Project:

At any time this major project in an administration goes viral, the percentage of benefit is more in technical terms it is the main part of the practicability studies that include large amounts of calculations and studies required which needs to be in legal limit before a yes of confirmation is agreed out to the authorities to go along with project.