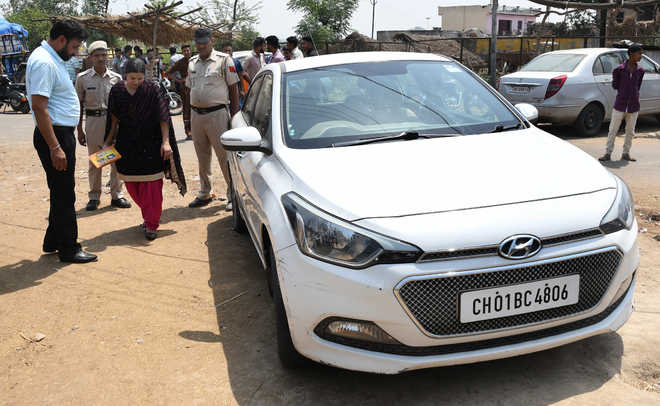 Amit Sharma aka Meet, was dead tomorrow outside a temple. He was a 30-year old bouncer, also he was the leader  of the bouncers’ group in Chandigarh and had been in the occupation  for the past around 12 years.

He was the father of one-and-a-half year old daughter. He was shot dead outside a temple in broad daytime. He was shot total 11 times as he was leaving the temple with his mother around noon. His mother, Roopa Rani was in the state of shock after seeing her son being murdered before  her eyes.

His mother said Two men came in the Maruti Swift car. Their faces covered with the mufflers.

A case of murder, criminal plan and crime punishable under the Arms Act has been registered  against Gagan, Surjeet and Sonu Shah on the basis of Roopa Rani  statement. They three were involved in a gang war with the expired group last November in Mohali.

An FIR  has been lodged at the  Chandimandir police station(Panchkula) on this consideration. A .9-millimeter pistol was used in the crime, police sources said.

According to the witness, two men came to the temple and deflated the tyres of a car, which later turned out to be Meet’s. She said more people might have been exist inside the car.

One of them was urinating against a wall when Amit and his mother came out of the temple. Amit  was about 20 ft ahead of his mother and both the criminals  opened thoughtless firing at him from behind before he escape away in their car.

His mother along with sightseers take Meet to the PGI Hospital, Chandigarh, Where the doctors announced  him dead on the arrival. Now, his body has been kept at the PGI mortuary.

Doctors said that Over the 10 bullets are said to have hit Meet in the back, chest, abdomen and left leg but the accurate number will be clear after the postmortem, which will be conducted today.

As the news spread, hundreds of bouncers assembled outside the Meet’s house in Mani Majra.

It is learnt that Meet had a scramble with his opponent group of bouncers over the headship/directorship of bouncers in the region, following which both groups had been involved in firing at each other in  Mohali and Chandigarh earlier.

The sources said- “The happening/occurrence  seems to be a fallout of the same one-upmanship war.”