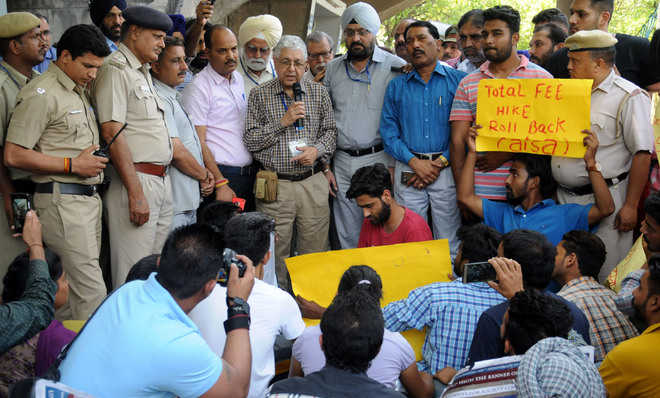 The Senate also clarified that to build a facilitate habitat and reach out to the opposing scholars, the accusation and subsequent proceedings against them be withdrawn in the April 11 incident.

In view of this, the Senate assured  to request the Chandigarh Administration that it may take steps to move the court for the conclusion of the case.

Pawan Kumar Bansal(Former Railway Minister) had suggested the suggestions, which the Senate  accepted to support without an opposition.

Addressing the Senate,Prof Arun Kumar Grover(the Vice-Chancellor), said he would also form a council, including  Senator,lawyer DPS Randhawa and  former student leader for the weekly analysis of withdrawal of cases.  Professor Grover declared that- “The new academic session should not begin with a backlog of the cases”.

The resolution came after a thundering session with Senators showing concern over the April 11 occurrence when brutality  broke out on the PU campus as well as the fee hike.

Senator Gurmeet Singh said cases against students in the April 11 occurrence must be taken back. He also shoved for a 10 per cent fee hike. “Today,We must send out right signals to students. He said-“We must give guarantee that all students sitting outside on protest go back today” addressing the Senate, adding that the ongoing stress  in the PU had affected the admissions in the forthcoming session.

Pawan Kumar Bansal(Former Railway Minister) also restated that the gathering should not be permitted to go waste. “Let us start by extracting the cases against the students. The matter was not handled justice,” he said, adding that it was crucial  that the sanctity of the Panjab University and that of the correlation between teachers and students was maintained.

Chief Sanjay Tandon (City BJP) appealed to the Senate to work towards an easy going solution to the issue. criticizing the April 11 incident, he said the students wanted to talk but the PU jurisdiction were not available.The trouble would not have occurred had the officials been available to talk,” he said, adding that whatever occurred  was not good for any participant.

DPS Randhawa said the Senate had four associates of parliament but they unsuccessful to collectively seek a resolution to the financial problems of the PU(Punjab university).

“If they unite and go to the MHRD or the Prime Minister, I’m sure, they will not get a no for an answer,” he said, adding that the university must act sensitively else each scholar from Kashmir to Kanyakumari would have a stone in hand.

“The fee hike is a delicate matter. Scholars will not oppose 10 per cent fee hike if a representative goes and talks to them peacefully,” he said, emphasising on increase in the student-teacher companionship.

Criticizing the PU jurisdiction for failure in tracking the April 11 case tactfully, Prof Rajesh Gill said the bandh call was pre-planned and declared, yet the jurisdiction unsuccessful  to address the students when they came seeking a dialogue. She said even after the registration of incident, only some teachers went to meet the scholars in police guardianship, and enlightened their parents. “Those who did so were humiliated by seniors,” she said.

“A wall has been developed between the scholars and teachers, don’t know how it will be removed,” she asked the House.

Dr Dilip persisted that barricades outside the VC’s office must be removed instantly to give out a message of peace to students.