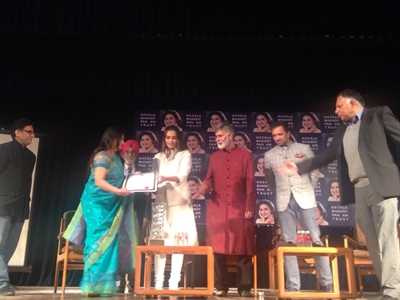 When people are determined they can overcome anything and that was clearly witnessed in this year’s Neerja bhanot bravery award ceremony which was held at St Stephen’s school, Chandigarh.

Actress Sonam kapoor who would be portraying the role of Neerja bhanot in the forthcoming biopic “Neerja” presented the award to Subhashini Vasanth , founder trustee of the Vasantharatha foundation which works towards the welfare and support of the  families of martyrs. Vasanth was presented with the award for recognizing her work and services for the martyr families started the foundation in the memory of her husband late Col Vasanth V who died while fighting Terrorist and was awarded Ashoka chakra in 2008.

The award which was commenced in 1990 is awarded to an Indian woman who overcame social justice or worked towards eradication of anti-social activities. The Award includes a trophy and an amount of 1.50 Lakh as a token of appreciation and acknowledgment.