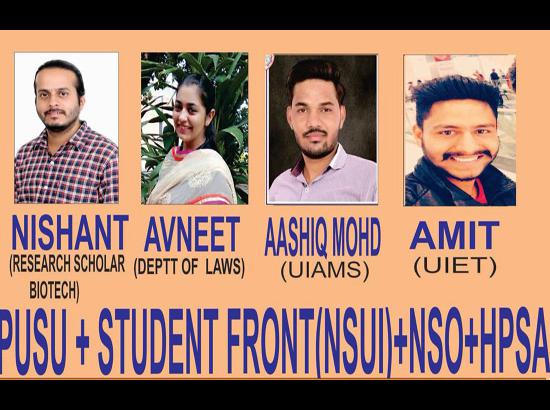 This year PUSU won the Punjab University campus Student Elections Council (PUCSC) elections. After a four year gap PUSU made a comeback in the elections.

But PUSU had make an alliance with NSUI a student wing of congress. PUSU president Nishant Kaushal won by 338 margin votes in which he polled 2843 votes while on the second position Piyush Anand Bawa got 2505 votes. Amritpal singh from the Students for Society presidential candidate also gave a tough competition with 2494 votes. But this year a female candidate Siya Manocha become an attraction she is only women candidate for president and got 2074 votes which make a record.

PUSU candidate Avneet kaur won vice-president seat by a great margin of 391 votes.  Her rival Sabhya Jaswal is so close to her.

For the post of secretary there is a close competition between PUSU candidate and ABVP. But PUSU candidate Ashiq Mohammad won with a small margin of 19 votes while Krishan Kumar from ABVP lost the seat. There was a recounting of votes for the post of secretary that had been damnded by ABVP candidates. But the margin becomes same after recounting also. This year elections take a turnover with NOTA feature.