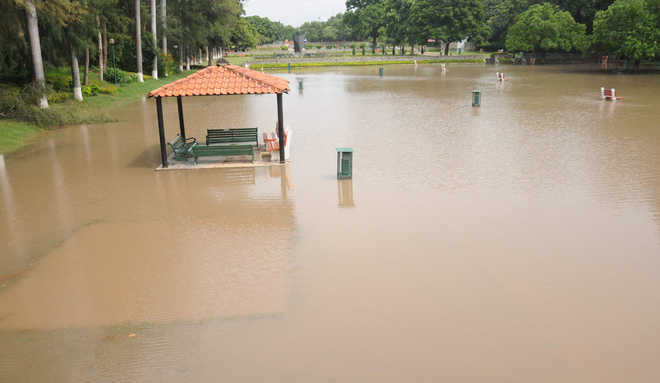 In the past 24 hours due to the heavy rain and squall lashed the tricity . Because of this heavy rain power infrastructure was damaged and many trees were uprooted. Various areas of the Chandigarh, Mohali and Panchkula for many hours remain without power and water

Met Department told that In the past 24 hours the city beautiful received around 62.6 mm rainfall. In the next two days more rain is predicted by the weatherman. Rainwater had entered in the various houses of the sectors 20, 33, 38, 45 and 52 and also in Ram Darbar, Burail village, Maloya, Dhanas.

Due to the heavy rain in the city roads were waterlogged because of this many motorists were stuck on the roads. All the gardens and Green belts were turned into the pools and also the Sector 33 Terraced Garden .

Many different parts of the city were plunged into darkness last night. Because of the high velocity winds Many trees were uprooted and their branches fell on the electricity poles and wires due to which a power breakdown triggered in the city. All the Complaint centres were  overflowed with so many calls from the public. Same situation was witnessed in the Mohali ,Panchkula and other parts of the city