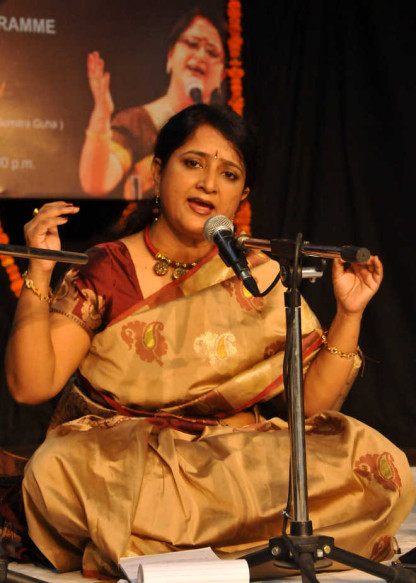 Yesterday in the auditorium of the Pracheen Kala Kendra 227th Baithak programme was organised. Equal proficiency was maintained of the pure classical vocal as well as of the lighter genre of thumri by Padmaja Chakraborty who is a Delhi-based maestro. The audience was in raptures while she was performing Thumri. She was Groomed by Pandit Samaresh Chawdhury and she was a gold medalist in music as well as a ‘A’ grade artists of AIR and Doordarshan.

She started her performance with the exposition of raag Bhopali that followed a brief alap bandish Hey Prabhu Suno Data with soulful voice and it is in slow-paced Vilambat lya along with phrases of alaap in progression badhat. She also performed a devotional composition in teen tal Mahadev Deva Maheshwaraye.

She was supported by Mehmood Khan who was on tabla and Rakesh Sharma on harmonium. All the artists are honoured by registrar Dr Shobha Koser and secretary Sajal Koser of the Kendra.
Padmaja is imparting classical training and she said that Classical music should be a compulsory subject in all the schools to catch the young talent and groom them.