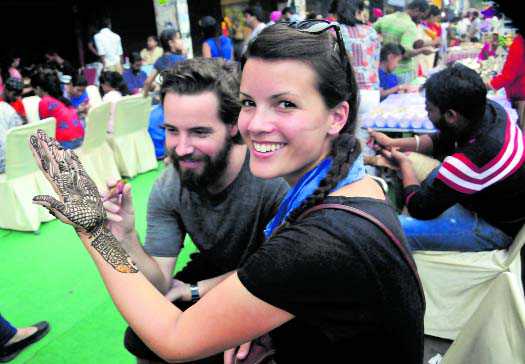 On the eve of Karva Chauth there was so much rush in the markets of Chandigarh, Mohali and Panchkula . Huge number of people came out from their houses and it was really hard to find any space for parking their vehicles.

The main reason behind this was the increased footfall during the festive season as well as stalls and tents have been set up in the parking areas. Under these tents Henna is being applied and Jewellery, cosmetics and other make-up items were also sold with the junk food.

Many commuters suffered through out the day because of the Traffic jams outside markets . And in the evening there was Traffic jams due to increased footfall. Pathways outside the shops were full with the henna appliers and bangle sellers. Tents on the roads outside was the major cause of chaos.

Vimla Dahiya said that she had to park her car outside someone’s house when she came to get henna applied on her hands. Also some policemen were there but they were busy in challaning motorists without helmets . They did not paid any attention to regulate the traffic.

Authorities said that it is the MC’s job but we will still ask our staff to do a round of markets and they don’t have any permission from us to put tents and stalls on the pathways and outside roads.