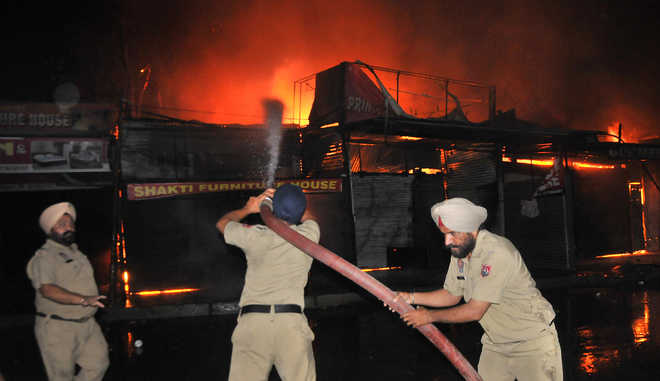 In Sector 54 furniture market catches fire and 8 shops were turned into ashes. These 8 shops are located on Sector 54 roadside. Fire was controlled after two hours operation by 12 fire tenders.

From past 10 years it is the 8th fire incident in this furniture market. At 9:38PM the owner of shops called the fire and emergency department and told about the fire incident. After receiving the call 2 fire tenders from Mohali and 10 from Chandigarh came to the spot. Also the entry to the Mohali from road dividing Sectors 53 and 54 was blocked by the police.

Around 11:45 PM this fire was controlled by the fire tenders and 6 trees were also affected because of the fire. Fire fighting was very difficult because highly inflammable material was present in the shops.

Some of the Eyewitnesses told that shops were made of tin sheds that stopped the fire from spreading to other shops. One of the official told that reason behind the fire is not known until but it looked like the fire has been started from one shop in which mattresses were stocked.

The owner of shops and their family members are in tears because stock worth lakhs turned into ashes and some of the shops were not insured. Shopkeepers blamed the Administration that the Administration has assured them that land will be provided to them but nothing was done.