Privatised The Power  In UT : Badnore 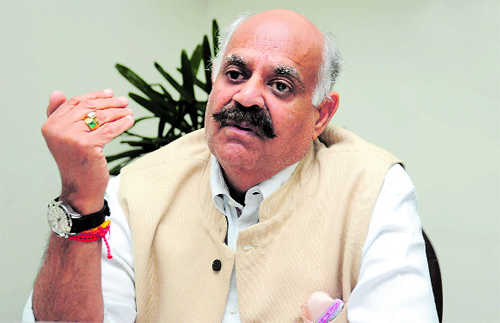 UT  Administrator VP Singh  Badnore  wants Chandigarh to be green capital of India and plans plans to restart public darbars again as soon as possible . He said that Prime Minister Narendra Modi wants to decrease the difference  between the generation, transmission and distribution of electricity, create equality in the discoms.

Governor of Punjab VP Singh  Badnore  said that we will be the first  one in the  country to realise the dream of the PM Narendra Modi  by starting up multiple private discoms to distribution of  electricity in the city.

This will help the consumers to choose their own service provider among the multiple service providers, if consumers are not satisfied with anybody’s service they can have option of switch over to any other provider.

He said that in European countries power  condition is totally different from india it was like mobile phone services,whereas in India consumers are facing poor electricity problem. He said  to change the poor electricity condition in India,  we will introduce the licensing system for  private sector and multiple license should be given.

Badnore said “I want to privatise the electricity system in India  with private discoms and  multiple licensees. He says that ‘The Smart City project is already there but he wants city to be the best in the India .